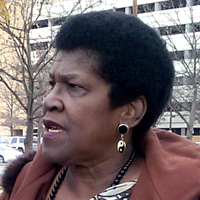 During those times I had faith, courage, and I was willing to do anything to help with the conditions that was being brought upon us in the South. My whole family was involved in the civil rights struggle. My father said, “We’re going down and get involved.” That’s what I believed in and that’s what I did, and that’s what I will continue to do. END_OF_DOCUMENT_TOKEN_TO_BE_REPLACED