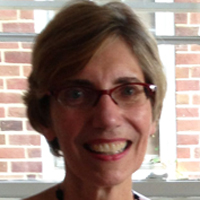 As a child, Ann Jimerson lived in Birmingham, Alabama, from 1961 to 1964, the years when Birmingham played a central role in changing the nation. Her father, Rev. Norman C. “Jim” Jimerson, served as executive director of the Alabama Council on Human Relations. Though the family’s Birmingham experience helped to define what they stood for, Ann did not return to the city until almost 40 years after they had moved away. Leading up to the 50th anniversary of the Year of Birmingham, Ann worked closely with her brother Randall Jimerson as he wrote a family memoir about their time there. Rand’s book, Shattered Glass in Birmingham: My Family’s Fight for Civil Rights, 1961-1964, was published by LSU Press in 2014. The writing drew their whole family closer. In 2013, wanting to offer others that experience of recalling how, as kids, they had made sense of a turbulent year, Ann started the website KidsInBirmingham1963.org. She now directs the nonprofit organization, a 501(c)(3).

Ann’s 30-year career in social marketing and health behavior change, in U.S.-based and international public health programs, helped her build skills that are useful for Kids in Birmingham 1963. These include formative research, focus group facilitation, strategic communication, evidence-based program design, and program evaluation. Previously, Ann was an elementary school art teacher and a Peace Corps Volunteer in Honduras. She currently serves as Co-chair of DOVE, Desegregation of Virginia Education, to locate, preserve, and widely share the hidden history of school desegregation in that state. Ann and her husband, Larry Klein, live in Washington, DC, close to their two children and two grandchildren.

Dad moved Mom and us four kids to Birmingham so he could join the civil rights movement. He may have been the only white man in the state whose fulltime job was civil rights. Mom and Dad had cautioned us not to talk about Dad’s work. With our teachers, neighbors, and friends, that piece of the truth could mean trouble. We navigated a fine line, technically never telling a lie but holding back most of what mattered to us. END_OF_DOCUMENT_TOKEN_TO_BE_REPLACED