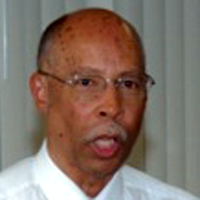 James Nelson, Jr. was born in Birmingham, Alabama. Though a first generation college student, his parents (James, Sr. and Mattie) encouraged him, as well as his two brothers and sister, to attend college. He received a B.A. from Miles College in Birmingham and a Ph.D. from the University of Alabama. He is the author of several papers in fixed point theory. He also developed a workbook in the Mathematics of Finance that was used at the Continuing Education Division of the University of North Carolina. Disturbed by the media’s constant attacks on the test-taking skills of African Americans, he took the personal challenge to take the qualifying test for MENSA, the high I.Q. society. Passing the test, he later developed workshops that enabled his students to score hundreds of points higher on tests such as the GRE and GMAT. Dr. Nelson is currently Co-Chair of the History and Archives Committee of the Ullman High School National Alumni Association.  They have secured space in the old Ullman Building and are now collecting artifacts for display.

Indeed, life during the fall of 1963 was far from easy in one old, hateful southern city: Birmingham, Alabama. I was a senior at Ullman High School eagerly awaiting graduation in its winter class. Cynthia Wesley was a fourteen-year-old student at Ullman; I was two years older. We first exchanged flirting glances. Then, through our friends, we passed little innocent notes to each other. After these notes, our friendship blossomed. She was so smart, happy, and full of hope. I still remember her smile that melted away all my shy defenses. END_OF_DOCUMENT_TOKEN_TO_BE_REPLACED