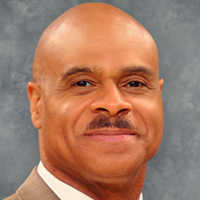 James L. Lowe, Jr., a Birmingham native, is the son of the prominent musician and jazz historian, J. L. Lowe and Roberta Lowe. As a child, he survived the bombing of Sixteenth Street Baptist Church. He graduated A.H. Parker High School as Valedictorian and was a cum laude graduate of Birmingham Southern College receiving a B.A. in Business Administration. He was called into the ministry at the age of six. After 20 years of trying to live life his way, he finally submitted to the will of God in 1978. He became an associate minister of the Sixteenth Street Baptist Church and later Minister of Music at the Macedonia 13th Avenue Baptist Church. He is currently Pastor of The Guiding Light Church in Birmingham, Alabama. Bishop Jim Lowe has served on the boards of the Crisis Center, the Alabama Jazz Hall of Fame and the Advocate Center. He has held various position in the business community before entering full time ministry, including two years experience with Pitney Bowes, 2 ½ years as an auditor with Liberty National Insurance Company and 12 years with SONAT as a computer systems analyst. Jim is married to Patricia Bruce. He has three children, Bobby, James Louis and Adrienne.

The weekend of September 15, 2013, as the nation commemorated the 50th anniversary of that tragic event, Bishop Lowe hosted the first reunion of the people who were children and survived the church bombing. For more on the reunion, read this article that appeared in the Birmingham News and AL.com: http://www.al.com/living/index.ssf/2013/09/addies_ring_church_bombing_sur.html and view this TV interview: http://www.abc3340.com/story/23407702/matters-of-faith-50th-survivors.

My feelings regarding the weekend of September 15, 2013

Events leading up to this past week, with so much emphasis on the bombing and murder of my Sunday School friends on September 15, 1963, have brought about very uncomfortable feelings to me of an extremely painful time of my life. I have been constantly reminded of that day when the church shook and I was splattered with glass that was shattered from the blast just a few feet from where several of my Sunday school classmates and I were. It has been very difficult constantly being reminded every day of the event. I am glad it is finally over.

Today, when people experience tragic, horrific events in their lives, they are offered counseling to help them make it through, especially schoolchildren. We were offered nothing. END_OF_DOCUMENT_TOKEN_TO_BE_REPLACED