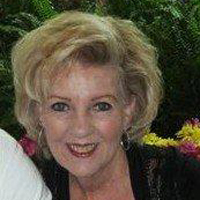 Years later, Judith learned that her father had taken action after the bombing of the Sixteenth Street Baptist Church.

CHILDREN, DON’T ANSWER THE PHONE!! In 1963, there weren’t yet any smartphones, cellphones, cordless, or touchtone phones, no answering machines or voicemail. At our home on Shades Crest Road in Vestavia, we did have at least 4 phones…rotary, desktop, wall, and a princess phone throughout the sprawling bi-level. We had all been taught how to politely answer & take a message. So my 2 brothers & I found it strange in the autumn of 1963 that our parents suddenly instructed us NOT to answer the phone. The tone of their voices when they gave this directive conveyed urgency; we obeyed, of course. Just let the phone ring, they said, or one of us will answer it!

It wasn’t until years later that we would come to understand why we could not pick up the phone during that turbulent time. September was always my favorite month, and remains so to this day…I loved the crisp fall leaves, the start of a new school year; it was the month of my birthday, as well as 1 brother’s & my Dad’s within a 2-week period (later my own daughter’s would fall within the same timeframe!). Those hopeful September feelings were present back in 1963 in my young mind as I became a high school freshman.

A few weeks after school started, my brothers & I noticed something else unusual in addition to our mandate about the telephone. An Alabama State Trooper in full regalia all-of-a -sudden appeared in his cruiser parked on our front lawn early every morning. When the 3 of us would emerge ready for school (we each attended private Catholic schools with no bus transportation), the Trooper would provide escort to our Mother as she dropped each of us off. Of course at the time, we thought this was pretty ”cool,” having no clue as to the reason for it; again, only as adults would we find out the significance of our State Trooper escort in that fall of 1963. Little did we know that our Dad, the head of our own household, had any connection whatsoever to the horrific events of September 15,1963, when 4 innocent girls were killed in the Sixteenth Street Baptist Church bombing—He was trying to protect his family in the aftermath of a decision he made in good conscience.

Daddy was a kind, generous, witty, intelligent businessman in a somewhat high-profile position in Birmingham in those days, as General Manager of WBRC-TV, Channel 6. He had moved his family there several years before from Cincinnati to take the job; he had a network of colleagues up & down the East Coast, but particularly cultivated his contacts throughout the City of Birmingham. He was adept at using the exposure that Channel 6 could bring to an issue that he felt was worthwhile. Thus, he was apparently determined to do what he could to assist the City in stopping the violence. Shortly after the bombings, he contacted as many “holy men” around Birmingham as he could: priests, ministers, rabbis, preachers of any and all denominations (we do not know if Rev. Fred Shuttlesworth was involved or not). The ministers were all invited to meet at WBRC, and use the TV Station as a forum or meeting place. Our Dad believed that of all people in the City, men-of-the-cloth should be the most forgiving & tolerant; since each had a congregation, he felt that they could be instrumental in calming the racial tensions, or at least stopping the violence. Our Dad was not an arrogant man who thought he himself could influence the situation, but was simply bringing together a group of people who he felt had the best chance of doing so.

What happened next was no surprise, for in those days in “Bombingham, Alabama,” a white gentleman involving himself personally in racial relations was not respected by nor popular with everyone in town, to say the least. Daddy received death threats, bomb scares, hate mail and such–at WBRC, at home, and in person. He probably did not anticipate the hateful backlash that his decision to invite the ministers together would visit upon him; but even if he suspected it, I doubt if it would have made him act any differently. For whatever faults or weaknesses he may have had, as does each of us, he was above all an ethical, selfless man, who always took the moral high road.

Whether the meetings of the religious helped to quell the racial unrest, I do not know. But to me, the important part of my story is that Daddy tried to be of assistance with the resources he had at his disposal & with the pressure he could bring to bear, on the most controversial of issues in the Deep South in those troubled times. He was a man ahead of his time. He did not hesitate. I thank him for the example he set for us 50 years ago. I did not have a chance to tell him before his passing how much I respect him for what he did. But, Daddy, I know you are listening now. We are so proud to call you Dad.

Judith Toxey wrote this story for Kids in Birmingham 1963 and gave permission for it to be published here in July 2013.