Even as a 7-year-old, Terry knew whose dialect he was mimicking. He asks now, “What is wrong with us — why do many of us want to cling to a past where an entire body of people were subjugated to another body?”

“Another old BBQ restaurant. The ‘Old Plantation’ downtown had great BBQ. Opened in the 20s, it stereotyped blacks and did so until near its demise in 1972 when ownership changed. It stayed open several years after under new management. The “Yes suh, it was cooked in da pit” sign was removed. Too little too late I suppose” (From Hahn’s Historic Birmingham Facebook page, public group).

You can see the words as clearly as I can; as I did every time we drove past the Old Plantation on Birmingham’s First Avenue. The hickory smoke hit you full in the face if you kept your car windows rolled down, which we always demanded when we neared the joint. Such a sweet aroma, tempting, though to my memory, my family never ate there, or at least never went inside.

When I worked for my father at Standard Jewelry Company, roughly six blocks from the Old Plantation, sometimes the elders would order takeout, and that’s my only memory of eating this old style pit barbecue. You know they used a pit and real hickory wood because of the brick chimney you see to the right in the photo, and because I vouch for the smoke aroma and taste.

Though Alabama does wrong so often, people in the state know how to cook real pit, delicious barbecue.

But taste and cooking techniques aren’t the issue here. 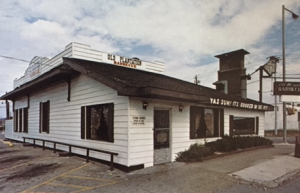 When I got the notice from Hahn’s Facebook group about this new entry, I logged on to see and to remember. The window to the far right, I think, is the one where the cooks would stand chopping the pork they had just taken from the pit. They wore white aprons, I remember, and those fluffy high chef’s hats. In those days of my childhood — the 1960’s — if you passed one barbecue joint and were tempted, you needn’t worry: there was another one just up ahead.

Carlile’s, The Golden Rule, Ollie’s, and many others whose names escape me now. The Birmingham area still boasts a number of excellent barbecue places from Dreamland, to Leo and Susie’s Green Top, to Bob Sykes in Bessemer, and to Rodney Scott’s new place on the south side.

I remember eating at Ollie’s often when I was a kid, but it was only as an adult that I discovered that Ollie McClung was the McClung in McClung v. U.S., a landmark Supreme Court case about segregated lunchrooms and interstate commerce.

In the early to mid 1960’s in Birmingham, everything was segregated, except in certain households like mine where black women worked all day for white families—even middle class families. The woman who worked for us was Dissie Shepherd, who not only ironed and cleaned but also played games with me, cooked for me, and loved me like a second mother.

In fact, it was Dissie who told me, with great dread, that we couldn’t go one afternoon to “Kiddieland,” in Fair Park. Just think of those names. We couldn’t go because people were picketing at the entrance.

Others were “boycotting” Kiddieland, Dissie told me.

It was 1963. I was seven years old and now had two new words to add to my vocabulary: “Picketing.” “Boycotting.”

In those days, black kids were allowed to enter Kiddieland for one day every two weeks, as I remember it. Just as on the afternoon local TV shows—Benny Carle’s “Bugs Bunny” and Cousin Cliff’s “Popeye”—black kids could only sit in the audience on camera every other Wednesday.

Of course, none of this made sense to me then; and I had the privilege of only being disappointed for a very short period of my white life, until a resolution came with integration. Not that integration changed everyone’s, or most people’s, attitudes about who was “better” than whom.

Still, think of it: one day every other week, because of your skin color/pigmentation, you had this and only this chance to play, to enter public spaces, to be entertained by TV celebrities. What if your parents couldn’t take you then, on that day? Whom would you have to beat out for the privilege of being seated to watch magic tricks or cartooned sailors?

As I reflected on the old plantation mentality, I saw the freak show that was segregation, and to enter that show, it cost me not one cent. I also saw and remember how quiet I was during that unfolded era.

On that Facebook page about Old Plantation Barbecue, there were many, many comments about Ollie’s, too, and about how good the barbecue was — and how old Plantation also made real cracklin’ cornbread. I can attest to that, too, because I actually bit into a cracklin’ on the day we ordered that BBQ takeout. I had no idea what I was biting, and spit the greasy thing out.

“That’s just a cracklin’,” one of my co-workers said.

In that moment, I wondered whether I was really a southern, Alabama boy.

But I was, am, and so as I scrolled down the comments section about the historic Old Plantation, I found some people talking about the original post which stated that the sign “stereotyped blacks.”

Believe it or not, some people took issue with that statement, saying that they never thought about the sign, but only focused on the good barbecue. Others claimed that the sign wasn’t racist language, but “rural southern” dialect.

I wrote a comment, too, which said in part that every time my family drove past the Old Plantation and saw its trademark slogan written boldly on the roof edge, one of us spoke those words in a clear, distinctive dialect:

One commenter said that this was just a reference to the old plantation days when the black cooks were assuring the plantation owners that they were getting the best cuts of meat straight from the pit.

What I know, though, is that when we recited this slogan, our accent was a mimicked Black one.

What I’m saying is that we knew whose accent/dialect we were speaking in. This was 1962 or 3, in Birmingham. Alabama. Even as a kid, I knew how to mimic Black speech, and I also knew it when I heard others mimic it.

Clearly, the Old Plantation could have written,

And if they had, wouldn’t we have known that the speaker was white?

Back to the commenter above: after all, what did happen on old plantations? Who was who in the house and in the fields, or barbecue pits? What hierarchy existed on those plantations?

And what images and references and social order were suggested, alluded to, and conjured up by calling this BBQ joint the “Old Plantation?” Knowing, as the owners did, that only white patrons would be allowed in to eat, cooked for and served by a black kitchen staff?

Maybe I’m going on too long and making too big of a deal over a simple facebook posting and its readers/commentators. Maybe at this moment in our anxious lives, yet another jab at someone’s remembered history is merely punching the already too bruised national body.

What I don’t know, however, is why anyone wants to take such great pains to claim that there is nothing wrong with the Old Plantation’s signage; that it’s just nostalgia for a time way back in our lives when we thought nothing of or were controlled by “political correctness.”

There was also an Uncle Tom’s Barbecue in Birmingham at 2200 6th Avenue South (a fact I discovered in Tim Hollis’ book Vintage Birmingham Signs), but I don’t remember it. How they came up with that name, I also can’t tell you.

What I do want to ask is, why is it so wrong, why is it so hard to look squarely at the Old Plantation sign, so clearly at our past, and say:

“Man, that was wrong. That must have hurt or demeaned, or caused a lot of senseless pain and lessening of an entire people’s self-esteem.”

What would be the injury of our saying, “I’m sorry” to all those who had to see that sign on countless days of their lives, and explain it to their children; why can’t “we” apologize for being some of those who said these words in the dialect in which they were intended?

What is wrong with us — why do many of us want to cling to a past where an entire body of people were subjugated to another body?

While tearing down Confederate monuments and renaming streets and places that were formerly named for Confederate generals — acts that I agree are necessary —let’s keep history alive by also talking about why such monuments and street signs and dialect on old barbecue buildings were erected in the first place.

Let’s be clear about the history we want to see, remember, discuss, and pass on. Do we want to explain, rationalize, or justify our acts?

And can we speak, finally, in our true voices?

Terry Barr first posted this piece on a personal blog in July 2020. In December 2020, he granted permission to Kids in Birmingham 1963 to publish his story.