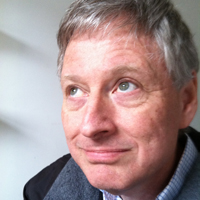 Yet one routine stayed, going grocery shopping with my mother on Thursdays. We went to the A &P store on 8th Avenue and 18th Street. We had a small buggy we would roll on the route from our apartment at 6th Terrace between 22nd and 23rd streets to the store. I remember walking by a helmeted National Guard solider with a weapon (a rifle, I think) posted on the corner of 8th Avenue and 19th Street. He also had a stand of some type, perhaps a weapons stand.

Either this time or a near Thursday our route took us by City Hall on 19th Street. The Seventh Avenue side at the time had a street-level parking area and a row of bushes. There was a march occurring on 19th street. I got a bit close to a barrier. A German Shepherd police dog on a policeman’s leash turned, barked at me and lunged forward a tiny bit. That was enough for me. My curiosity was immediately sated. I was afraid of dogs in general and big dogs in particular. I turned, ran, jumped over some bushes and headed precipitously into the park. Some people are terrified of spiders. For me as a kid my terror was dogs, which is why I guess I remember this. I do not know how far I got, but I got there fast.

The general impression I heard in the project was perplexity. What was the fuss all about?  The block I was on had a large titer of older women. They seemed truly not to understand. They would say that the “coloreds” they knew were happy. We were all happy, weren’t we? Neither the “coloreds” nor the whites wanted to mix, they said. “Everybody was happy with their own kind.” It was “outside agitators” causing all the trouble between races. They came in and stirred up “our colored folk.” Martin Luther King was the leading villain. If he and his crew would just go away, everything would be fine and return to normal. They “just wanted to come in and take over Birmingham under the cover of helping colored folks.”

I went to Saint Paul’s Parochial School that was on 4th Avenue just a little more than two blocks from my home. Thankfully, that gave me a far different and far better take on the racial situation. Still it took me several years of talking and reading to fully understand that if you lived just a few blocks west of where I lived, life was made harder by the racial code of the era.